ACON’s Pride in Diversity lists only a few “media” members.

In part 1 I looked at our ABC. In this part 2 I will look closely at how SBS uses talent to make pro bono or in kind contributions to the Pride in Diversity mission in exchange for AWEI points.

In the 2021 AWEI SBS scored 185 out of 200 points, making it a gold employer. It is also a silver sponsor by dint of providing pro bono media services to Pride in Diversity. Services such as lending out Riccardo Goncalves to MC the 2020 Australian LGBTQ Awards. Yes, that’s the Pride in Diversity AWEI award ceremony.

This is in addition to their other contra deals such as pre-paying to advertise ACON for the Honour Awards.

Corporate Heroes Get Into The Action

SBS lends out executive-level staff to speak at Pride in Diversity events. This benefits SBS by netting them up to 2 AWEI points. Although it costs them in time and lost productivity for their senior staff.

It benefits Pride in Diversity by having the very public support of the SBS. They don’t even need to pay a speaker’s fee.

Pride in Diversity tries to get the maximum cultural capital out of executive appearances. It does this by demanding that the CEO themselves speak at events promoting LGBTQ inclusion.

SBS sent a Director of Indigenous content to speak, but was NOT granted the 2 points for this question. PID notes the reason “Not CEO/equivalent“.

Pride in Diversity was happy to accept Orman’s time, to bill her as a panellist, and charge people who registered to hear her speak. However they didn’t bother advising SBS that she wasn’t of high enough rank to gain their points.

It’s one thing to lend out a director of programming for an afternoon, it’s another to redirect the whole cast and crew of a TV show to score 1 point on the AWEI index.

SBS profits from the gender gospel

Question 8 of the AWEI is about engaging with suppliers, vendors and business contacts:

We can show evidence of promoting our commitment to LGBTQ inclusion in up to two of the following areas:
• pitching for business or contracts
• engaging with potential clients/customers
• applying for funding
• engaging with strategic partners or key external stakeholders

In response, SBS have produced their own (Pride in Diversity-approved) LGBTIQ+ training course (with the paid assistance of Pride in Diversity consultants). This course is available on the market. 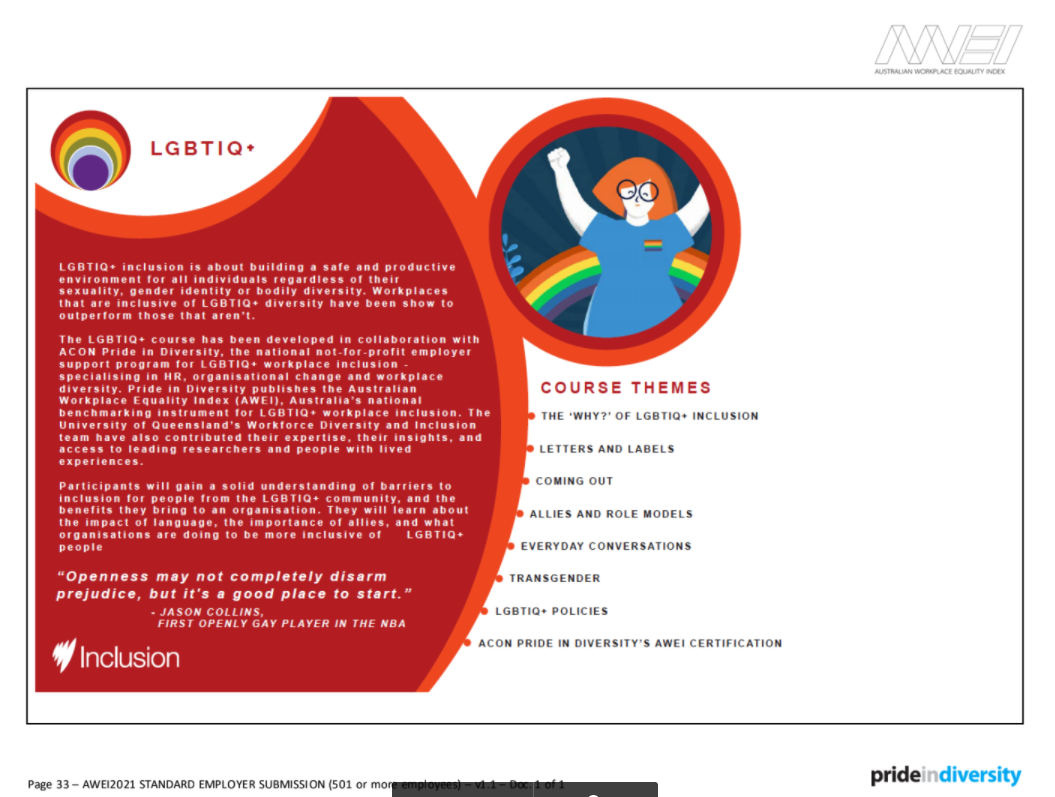 Pride in Diversity has successfully co-opted the resources of our government-funded media to spread it’s message. SBS received their 4-point reward.

Diversity, but only a little bit

This is a good point to note that the training course advertises the “benefits of diversity” but it only deals with limited diversity among sexual behaviours and gender identities. These are arguably best left out of the workplace in any case – having sex at work is still frowned upon. Diversity of ability, cultural background, languages spoken, neurotypical status – these are not covered by “Pride in Diversity” or the LGBTIQ+.

There’s a certain sinking feeling to be had with the realisation that both ABC and SBS have such deep links to ACON/Pride in Diversity. ACON has a clear agenda to promote transgender inclusion at the expense of women’s rights.

Our lefty media outlets can’t be trusted to report the truth on how transgenderism harms women. Not when they are directly being advised by ACON.

ABC and SBS submissions to the 2021 AWEI scheme were obtained under FOI and are freely available for you to download.

Please get in touch confidentially via twitter or email if you’d like to discuss these or similar documents.